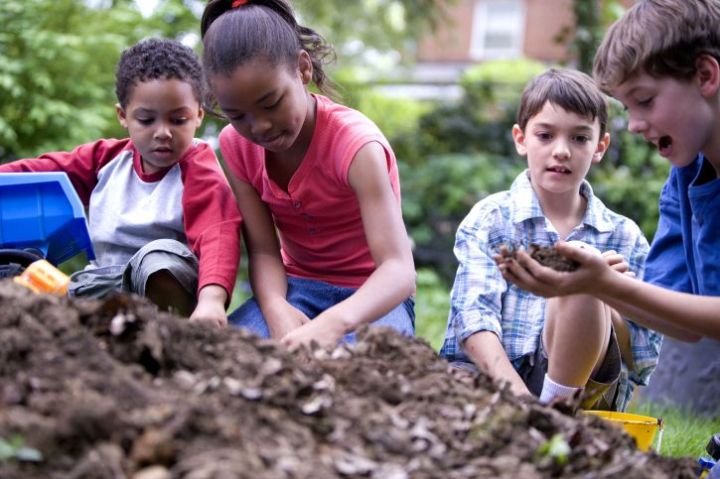 I have argued here that play emerges in a transitional space, a space between inner and outer, between me and not me, and between me and you. I have focused on play as an intersubjective phenomenon, but what about play that occurs when someone is alone?

The transitional space where play–intersubjective or solitary–occurs is a mental space. Is any particular physical space necessary for the emergence of quality play?

In an earlier post, I wrote about Mark Lanza’s Playborhood, an elaborate backyard play space created by a parent for his children. Lanza contends that children need more time for play, specifically for undirected and unsupervised play, in order to develop and grow into autonomous adults. He created the Playborhood in his yard to encourage such activity and support his children’s development of independence. It seems that Lanza would argue that yes, a dedicated space for play, with equipment to facilitate the process of play, does in fact enhance the quality of play.

But what happens to children without access to such playgrounds? Is their play somehow inhibited, or even inferior? While access to play spaces are undoubtedly influenced by socioeconomic conditions, the kind of play that I am writing about here does not hinge on any particular type of equipment or space but rather on a relationship, either with others or with oneself.

Indeed, what if such elaborate play spaces as Lanza’s Playborhood actually constrict and stifle the development of creative play?

Artist Mark Neville’s photographs of children playing, seen now in the exhibit “Child’s Play” at the Foundling Museum in London, testify to the fact that play happens universally for human beings and that play does not depend upon any particular play space. Rather, play emerges spontaneously, sometimes in the activity of a solitary child, sometimes in a child interacting with an animal, and often in the context of a human relationship, with adults or with other children.

In a BBC interview posted on the Foundling Museum website, Neville discusses the self-directed and self-determined play that happens even in war zones where he photographs children, often at play. He demonstrates through his photos that play is universal and that any space can become a transitional space for play, and he notes that the element of risk involved in self-determined play is key for the development of a child’s independence and self-confidence.

The interviewer points out that Neville’s photographs of children playing do not show them smiling, prompting Neville to comment that he finds the human smile to be a “kind of barrier” to reading images. Interested in  spontaneous play and the kind of play that does not depend upon equipment but rather a human creative spirit, Neville’s photographs show children playing all over the world in all types of environments. Calling play “fiercely important,” Neville notes that even in the most distressed, war-torn areas, children express the very deep, human need to play. He mentions that they often “played” to his camera. The absence of smiles illustrates graphically Neville’s point that play is not always joyous and high-spirited, but sometimes dark and disturbing and always very serious business.

According to the curator,

Neville’s work challenges the romantic ideal of play with the reality of children’s lives, which is often harsher and more complex. Through his photographs he captures children’s spontaneous urge to play and their determination to do so in the most unfavorable environments, revealing how through play children claim a place of power, safety and freedom. In the context of the Museum, the idea of spontaneous play is set against the institutional play evidenced at the Foundling Hospital.

Neville’s work documents not only the importance of play but also the universality of it. His photographs raise the question of whether or not the manicured parks and elaborate playgrounds that are only available to children of privilege are enhancing play at all.

While Neville’s work seems to say that children cannot not play, in her case study, “Play in the Psychoanalytic Setting: Ego Capacity, Ego State, and Vehicle for Intersubjective Exchange,” psychoanalyst Karen Gilmore (2005) explores the psychoanalytic treatment of a boy she claims “does not play.” Reviewing the psychoanalytic literature on play in therapy, Gilmore observes that play is no longer seen merely as a “wish-gratifying phenomenon” but rather “conceptualized as a complex normative growth promoting capacity that evolves with cognitive and psychological development” (p. 214). In other words, we, as human beings, develop the capacity to play just as we develop the capacity to think and organize our emotional life, and along with cognition and emotion, play is instrumental in our growth.

The therapeutic action in play therapy, argues Gilman, occurs in the space created by child and analyst that is “demarcated as meaningful and yet not real” (p. 215). She continues:

While both action and verbalization are involved, what is optimally achieved is an intersubjective exchange in the mutual state of playing where transformation of the child’s anxieties and defenses can be accomplished by the analyst’s clarifications, reciprocal engagement, and interpretive work.

Just as an infant’s very identity emerges in the context of play with his mother, a child’s therapeutic progress–the capacity for change–emerges out of a state of play.

Gilmore describes her patient, Andy, as a child who eludes her efforts to engage him in play and therein thwarts her efforts to effect any sort of transformation. She notes that Andy had difficulties in the areas of attention, affect regulation, and frustration tolerance. Indeed, he was prone to melt-downs and developed strange behaviors that compromised his ability to behave acceptably in school. Most disturbing, though, was his inability to play. She notes,

While much of Andy’s relevant personal early history was indistinct due to his parents’ relative lack of awareness, the absence of imaginary play and even typical infantile play (such as peek-a-boo) with either parent was noteworthy (p. 217).

Drawing on the work of modern attachment theorists Winnicott, Gergely, Watson, Fonagy, and Target, Gilmore argues that Andy’s development was compromised by an early environment that deprived him of the ability to play and therein constricted the elaboration of his sense of self. Because Andy’s parents demonstrated a “striking…lack of awareness of Andy’s mental life or, for that matter, of subjective or interpersonal experience in general” (p. 224), and because of an “absence of unstructured play,” (p. 221) Andy never developed the capacity to regulate affect, which is facilitated by the attachment that is developed and deepened through mutual engagement in play. In addition, Andy’s parents’ inability to conceive of his mental life at all resulted in Andy’s very limited inner world.

One of Gilmore’s conclusions is that Andy’s inability to play complicated her ability to engage him in child therapy. I would argue, though, that Andy may have been more capable of play than Gilmore thought. If we assume with Neville that all children play, no matter what the environment or circumstances, then how might we locate how Andy played, in spite of his history of a paucity of play?

Gilmore tells us the following about her work with Andy:

Early in our relationship, Andy announced: “I’m an oxymoron,” proof of which, he suggested, was his “wish to die while everyone wanted the “opposite” for him. He then proceeded to demonstrate his global determination to “do the opposite” for example, he insisted that any activity he agreed to participate in must be done lefthanded and claimed to be left-anded, which is is not. He did not play and he seemed most emphatically unwilling to talk, even about the mundane facts of his life. (p. 225)

Gilmore interprets Andy’s opposite game as a “defense against the variety of encroachments that beset him when he first presented and which continued to threaten his tenuous narcissistic balance” (p. 225). She states emphatically that he “did not play,” but isn’t this oxymoronic game of opposites Andy’s form of play? If play is a way to investigate and consolidate identity, wasn’t that exactly what Andy was doing? Wasn’t he attempting to understand himself and communicate this understanding to his therapist?

And if play is enacted in a transitional space between self and other, between inner and outer, then I would argue that Andy’s game of opposites was a way to locate himself relative to the other–to the therapist–and in doing so, a way to consolidate an identity for himself. While Gilmore sees his oppositionality as a problem–a defense to be analyzed and resolved–I see it as an assertion of self, a form of self-advocacy (1) and a way of coming into being.

Neville’s insistence that all children play serves as a reminder to play therapists, myself included, not to conclude that a child cannot play but rather to seek understanding of the form that a child’s play takes. In other words, if we assume that children cannot not play, then we will look for the perhaps nascent signs of play before concluding that a child cannot play, even a child who presents as severely constricted. It is our task to meet our child patients where they are in terms of their capacity to play and to move them along developmentally so that their play can become richer and more meaningful and so that they can deepen their self-understanding and begin to creatively transform their identities.

^1. For more on oppositionality as advocacy, see Tawanda Hubbard’s work, A New Take On Adolescence.